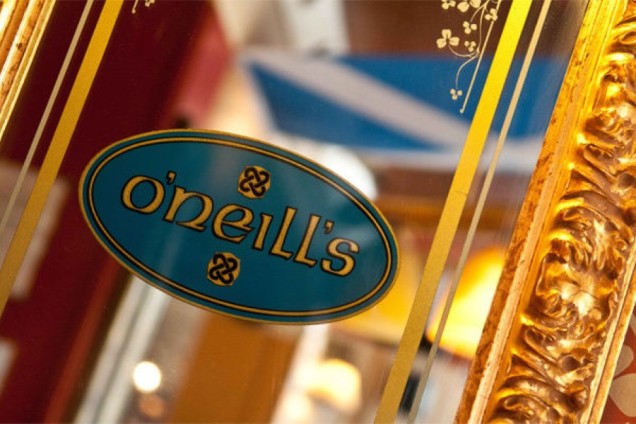 All ‘information’ in this review is ‘accurate’ as of February 2016.

You know when you fancy a trip to New York but instead of actually going there, you just eat a tin of hot dogs with your bare hands while watching an old repeat of Taxi? Or when you think about how majestic the Northern Lights must be gazed at through the steam of a magnificent Icelandic geyser, but instead of going, you just turn the thermostat down and fiddle with a laser pen in the shower?

Nope, of course you don’t. Because those are terrible things to do. Which brings us neatly to the idea of drinking down the plastic Irish chain shit-tip O’Neill’s. If you’ve always fancied sipping Guinness in its homeland, the beautiful Emerald Isle of Ireland, then jump on a RyanAir flight and go there. It takes less time than an episode of Tattoo Fixers and costs the same as a pair of Primark chinos.

Location: On the corner of Friar Street and Blagrave Street. Drinkers with vision difficulties can follow the stench of the fetid yellow puddle collection that graces the basement pisspits that staff often jokingly refer to as ‘toilets’.

Drink Selection: Ah, well, it’s jus’ loike bein’ back in de’ muddaland, so it is… In so much as they sell Guinness and Magner’s.

Beer Garden/Smoking Area: Smoke outside on the road or take advantage of perhaps the single most depressing smoking experience open to Reading boozehounds and head out to their little secret smoking area to the right of the bar. It’s basically a nine square foot nicotine dungeon. But at least you can’t smell piddle out there. Every cloud, etc.

Toilets: Right. You know urine, don’t you? That smelly yellow liquid you excrete from your urethra? Good. Well. It’s like the toilets are somehow made of the stuff. The stink is so overpowering that it has an almost hallucinogenic quality. The last time we were in there the effect took hold and instead of being disgusted and leaving, we started thinking about the heritage of the stench. We were smelling generations of different Reading folk’s slashes. It was oddly touching and enough to bring a lump to our throats. A lump which, admittedly, turned out to be vomit. But still.

Food: Hit and miss. Which, ironically, is Cockney rhyming slang for ‘piss’.

Atmosphere: A mixture. Some post-work, some drunks, some football types, a lot of idiots. Let’s face it, if you’re actively deciding to go there for a session – whether you’re a watersports fetishist or not – there’s something wrong with you.

Sports? Depending on how long you can hold your breath for, the place is actually half-decent for sport (in the context of Reading). That said, if you can’t get a seat near the big screen at the end, you’ll likely fracture a vertebrae in your neck straining to watch the smaller screens dotted about and mounted ceiling high.

Pub Games: It’s all about pumping Magner’s into people and having them flush it through their systems and onto the floor of the toilets, there’s no time for pissing about (LOL) with fun. Though there is a pool table down at the end now.

Decor: Imagine a chain opened a shit Irish pub decades ago and then never bothered looking after it properly. That.

Basically, it stinks of piss.