Back when Reading was razed to the ground in The Great Apocalypse of 2005, there was virtually no hope for the people of the town. Survival rates stood at just 0.5% and the nuclear fallout made RG1 uninhabitable. Inevitably, robot zombie holograms took over and people had to retreat to the outskirts of town to attempt to rebuild and start again. And that’s when Kennet Island was born.

Days are mostly spent foraging for food and sustenance, but occasionally, if illegal black market shipments of Stella Artois and Kopparberg make it through, the survivors still like to head out for a drink with friends. And when they do? They go to The Island Lounge.

Location: Far enough away from the centre of old Reading town to avoid the bomb blasts, but close enough to the M4 to allow for hordes of berserk nuclear mutants to ride their motorcycles out onto in a quest to find more petrol.

– Alright, alright. We’ll stop with all this silly Mad Max bollocks now. Just bear in mind that Kennet Island is new and weird and ever-so-slightly completely fucking soulless, depressing and like some kind of disturbing haven from out of a 1970’s science fiction film. Alright? Good. Now let’s get back to reviewing The Island Lounge…

Atmosphere: In the evening? None to speak of. Although, maybe we’re wrong. It was so dark in there, it was impossible to tell if there was anyone else there. It might’ve been banging in there (it definitely wasn’t).

Drink Selection: Limited. A couple of standard lagers and a few ales and cider by the bottle. It’s only little, though, so you wouldn’t expect much more. It’s as much a daytime cafe as it is bar, really. It’s got to act as both being as there’s sod all else on Kennet Island. Except – we assume – a pretty active swinging community (how else do the oddballs that live there pass their time?).

Food: We didn’t try any – we went too late, but an ever-changing daytime menu looked promising and probably caters for a lunchtime crowd pretty well.

Sports? Judging by the way they’d tuned in Absolute 80s Radio via the TV, we assumed not. But a reader got in touch in the comments to assure us that it does. And is pretty lively on match days…

“I go in there for a pint on the way to football. Oliver, the owner, serves a decent pint. Always a local ale on. There’s a decent crowd on match days. And he has BT Sports on the TV.
Try again on a Saturday lunchtime.”

Beer Garden/Smoking Area: There’s a collection of metal garden furniture out the front that you can stroll around, puffing on your e-cig, staring up at the little flats and wondering where we all went so wrong.

Toilets: One cubicle doesn’t sound many and it isn’t. But it’s enough.

Punterwatch: People who live on Kennet Island, mostly. Whoever those people are. Crushed, soulless types, shuffling into The Island Lounge for a pint on their own and then shuffling back out again. All of them dead behind the eyes except for when they’re getting it on with their neighbour in the box room of their small, poorly-built ‘executive apartment’.

Pub Games: You can play the ‘What Are the Pros & Cons of Living on Kennet Island Game’. The winner is the person who can name a pro that isn’t ‘it’s near the motorway’. 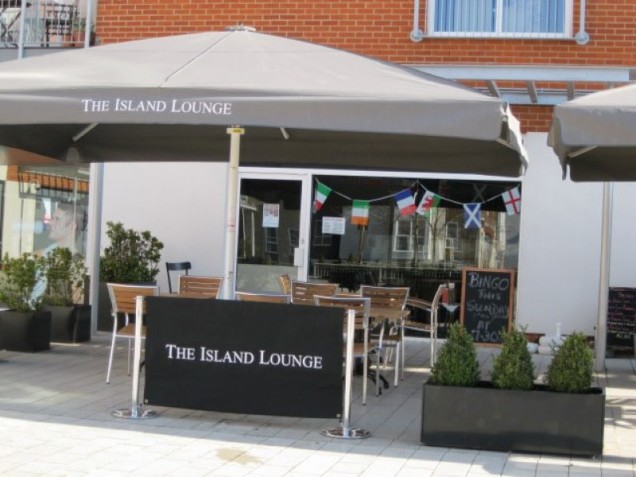 Any Other Comments: The Island Lounge is not to be confused with the now-shut Oxford Road ex-knocking shop, The Lounge. So please don’t ask for ‘The Girlfriend Experience’ or ‘oral without’, as refusal often offends. They can provide you with an ‘ATM’, though, and tossed salad is on the menu, but you may be left somewhat disappointed by both.

The Island Lounge at Kennet Island – It’s fun to pop in and imagine the world has ended and you’re in some bizarre Dystopian futurescape for a bit. But only really for one drink. As a little cafe thing in the day, it’s probably fine. As a place to enjoy a few social drinks, well… It’s on Kennet bloody Island, isn’t it? Spend enough time there and you’ll pray for a real Armageddon.

2 thoughts on “The Island Lounge”