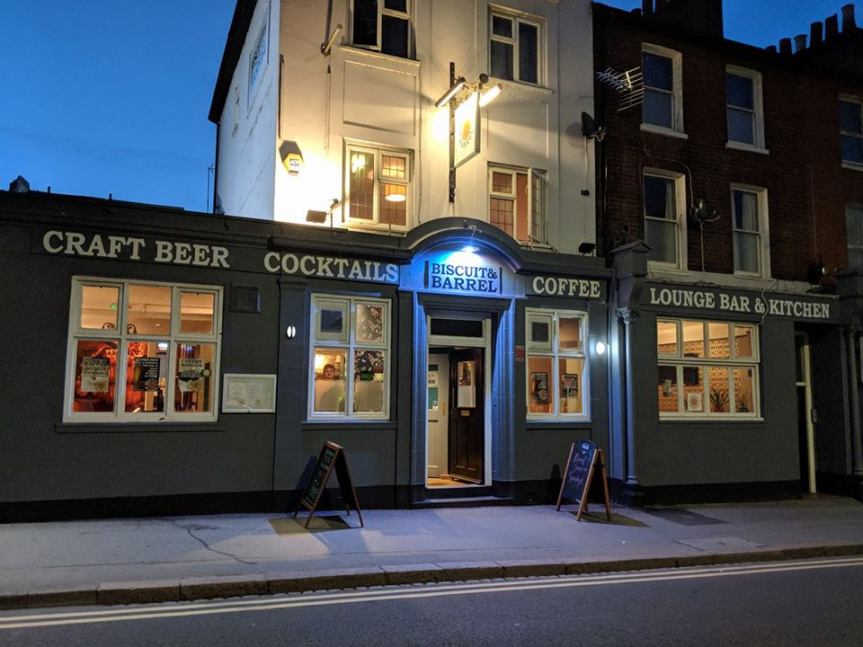 All ‘information’ in this review is ‘accurate’ as of August 2018.

Opal Fruits. The Spastics Society. Bruce Jenner. What do they all have in common? Well, they all changed their names, much to public surprise and controversy. And, in the words of every other Buzzfeed headline since 2016, people just couldn’t handle it. Yet sometimes things change and no one makes a big deal out of it at all. Like the human body, for instance. I recently found an inch long hair growing out of my left ear. But you don’t see me telling anyone about it, do you? No, you don’t.

Pubs change too. In fact, they’re always changing. The main difference is usually that they go from ‘open’ to ‘closed down’. Surviving pubs often get facelifts and even rebranded, usually to some level of fanfare (at least on a local drinker’s level, anyway). Not the Biscuit & Barrel, though. They opted for a rather soft launch. A soft launch so soft it could’ve taken a dozen Viagras and still been left sat crying on the edge of the bed while its girlfriend tells them it’s fine and it happens to a lot of men and it’s probably just stress because I’ve been having issues at work recently.

What we’re saying is this – the Biscuit & Barrel is kind of a new pub in town, but unless you walked past it, you wouldn’t necessarily know it was there. Well, you might. But you’d probably think it was the old place it used to be with the old name. It’s kind of like if you were Bruce Jenner’s mate waking from a coma you’d been in since 2015 and you went round his house to see if he was coming out for beers, only to be greeted with the runner-up of Time magazine’s Woman of the Year. Or something.

Do you see what we’re basically getting at here…? Christ, I’m still shit at writing introductions, aren’t I?

Location: You’ll find the Bn’B a couple of minutes walk up Kings Road from town. On the way to Prudential. It’s opposite BoB’s and The Thirsty Bear. Near The Blade. Yeah?

Used to be: Formerly the Bali Lounge, that place ceased trading in January 2018. Some three plus years before that it was The Warwick Arms. Both were half pub/half Thai restaurant-type affairs.

Opening hours: Midday start every day. Shuts at 11pm Sunday to Wednesday. Other nights you can be in there ’til Midnight.

Staff: We’ve been in a few times since it’s opened and seen two different young fellas behind the bar. Both are friendly and chatty and polite even when you’re jabbering a load of drunken crap.

Drink Selection: There’s a not-too-shabby selection of booze liquids available. Three lagers (Carling, Pravha and Estrella Damm when we were in), an IPA, Guinness, Blue Moon, Aspall and a couple of ales, which are rotated weekly, apparently. Being a ‘modern’ pub it has plenty of craft bottles in the fridge and all sorts of different weird gins, bourbons, vodkas, rums and whiskies to choose from. There are also a few cocktails and shooters and the like on the go too. Which is good news if you’re a nineteen year-old girl. Or me after six pints. Well, four. Alright. At any time.

Price: As ever, I’ll be buggered if I know. I don’t remembering getting angry at the prices, so I assume they’re about right. Or I was too pissed to notice. Let’s just say ‘average’, eh?

Deals: It’s two cocktails for nine quid of a Thursday night and 4pm-7pm all other nights (they’re around £7 a pop usually). That three hour window is the Happy Hour every day, where it’s three Queenheads a Carling or pint of old man ale.

Food: There’s a new chef in place as of recently (August 2018). Early word is that the food has improved. We can’t vouch for that because pubs are for DRINKING in, so we didn’t try the grub. Menu’s here, though. And here’s the Sunday roasts bit.

Decor: It’s a bit of a funny place, looks-wise. It still gives off a whiff of ‘proper pub’ about it, despite its standard new pub blue/grey exterior and the slightly odd decor mixture of restaurant, bar and twentysomething couple’s front room. There’s a lounge-y bit to the right of the bar with big slouchy sofas that’s quite snazzy, albeit it looks slightly like a Homesense showroom.

Sports: Yup. Sky Sports. There’s no BT Sports, mind. But that’s not hugely surprising, given how much BT costs pubs. The Thirsty Bear across the road has British Telecom Sports Television, though. If you’re really desperate.

Pub games: Darts, a fruity, some weird little sit-down ’70s arcade game thing like they have in The Allied Arms… And a pool table which plays well enough, although the fruit machine hampers cueing a bit. Takes quids, unless – and this is good – it’s Sunday or Monday night. When it’s an open table and all games are free. S’alright that, innit?

Punterwatch: Well, here’s the tricky bit. It’s quite hard to say too much about who else gets down the Biscuit & Barrel, given that we’ve never really seen that many people actually in there. Maybe that means it’s struggling a bit, maybe it means we’ve just been unlucky/lucky. Or maybe it means that the primary audience are ghosts, ghouls or spectres, invisible to the naked eye. If it’s the latter, that might explain the wide range of ‘house spirits’.

There you go. That’s a joke, that.

Beer Garden/Smoking Area: You’ll need to inhale your carcinogenic fumes in the little outside strip as shown below. It’s not overly generous or exciting, but that doesn’t prevent it from still probably making it into Reading’s top three bloody beer gardens.

Music: Last time we visited – late of a Saturday night – there was young person’s ‘drums and bass’ type music on.

Toilets: Nowt nasty to report at all. Clean and tidy and well stocked. No bog rolls jammed into the u-bend, no bangers n’ mash causing a blockage, no urinal cakes full of pubes.

The Biscuit & Barrel is a decent pub that’s worth diving into if you’re out boozing in town (especially if you work nearby). Being slap bang opposite a ‘spoons probably doesn’t help them massively, but while it’s pricier than BoB’s, it’s an independent pub with better grub, Sky Sports, music and a pool table.

And, c’mon… They’ve made an effort with the name, haven’t they? That’s a nice touch.