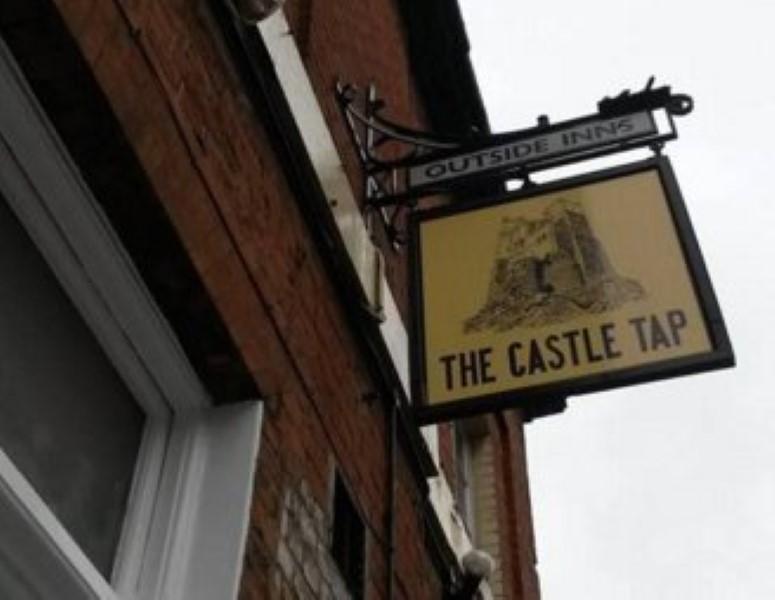 All ‘information’ in this review is ‘accurate’ as of November 2015.

What do you do when you hear the term ‘craft beer pub’? Delight at the prospect of interesting drinks, ‘artisanal’ cheeseboards and barmen with sleeve tattoos, an extensive collection of vinyl EPs and lumberjack beards? Or do those words make your jaw clench and your anus contract? Your reaction to The Castle Tap will depend on your answer to that question…

Drink Selection: Potentially second to none in town. Alongside the three cask ales, there are fancy craft beers (which we’ve nowt against in and of themselves) and an extensive collection of exotic foreign bottles. So many, in fact, that you need to pick them from a brochure kept behind the bar. The pub’s from the people behind The Alehouse and The Harris Arcade beer n’ cheese shop The Grumpy Goat, which explains the range and borderline beer fetishism.

Location: Marginally out of the way for passing trade, you’re unlikely to stroll past it. Unless you’re slung out of the police station and head the wrong way into town. For a mini crawl, you could start here and then head to The Sun and then The Horn. It’s up to you, though. We’re not your mother.

Food: There’s no cooked grub on the go, but lactose-tolerant snackers can dig into the previously mentioned cheeseboards. And not ‘chessboards’ as we originally wrote for some reason. Either way – neither of them should be on a pub table. Peanuts and dominoes, sure. Cheese and chess? Not for our money.

Decor: Half Hackney hipster hole, half posh railway tavern, the 1,500 Watt lightbulbs make for a stark, unforgiving scene. The hospital theatre-style lighting illuminates the bare floorboards, giving the place a seriously austere, clinical look that makes it constantly look like last orders. It’s tasteful, no doubt, but about as welcoming as getting called a prick on the way in. Smart? Yep. Cosy? Nope.

Punterwatch: There’s a small smattering of locals from the olden days, but most people have seemingly make the trek out specifically. Mostly IT types who are on the spectrum and talk slightly too loudly about Linux and go to Bowling For Soup gigs. Admittedly, that description applies to about 80% of Reading, but you get the point. They say ‘amazeballs’ still and leave house parties at 10pm. They watch Battlestar Galactica and… Well, you see what we’re saying here.

Beer Garden/Smoking Area: There’s a small beer garden out back and little alleyway you can use.

Toilets: Normal. Nothing out of the ordinary. Apart from signs for events like these:

Sports? There’s a ‘TV Room’ out the back which is carpeted and nice enough, so we’re assuming there’s Sky and BT. Unless they just put old videos of Time Team on, we’ve no idea.

Price: You’ll pay for the fancy efforts, but you’d expect to. Ales and lagers and cider actually come in a pretty decent price. Watch out for the old ‘two thirds of a pint’ effort, though. We paid £4.20 (easily the priciest draught on the go) for a strong craft beer and only turned out to be two thirds of a pint. Which we were warned about, admittedly. It’s worth a casual glance at the chalkboard menu before ordering. You can pay on card on orders over a fiver.

Visible Savory Snack Selection: A few Kettle Chips-style crisps and the expected Mason jars of pricey cashews and the like.

Seating: Unless you have cushions surgically attached to your buttocks, you’re unlikely to get too comfortable. They might look snazzy when the place is empty, but hard wooden chairs and stools are no fun for sitting on. Piles sufferers beware.

Any Other Comments: The Castle Tap replaced the ultimate backstreet boozer, the scruffy Irish pub, The Horse & Jockey. A lively place with a community atmosphere, those in the know will remember it as much for its welcoming feel as for its embracing of the two forbidden ‘A’s – afters and ashtrays.

12 thoughts on “The Castle Tap”