Ah, the ‘themed’ bar. As the theme of a theme park is so often ‘getting ripped off while trying to avoid intimidating groups of gypsies’ and – increasingly – ‘amputation’, the theme of the theme bar is usually ’embarrassingly shit’. Which brings us on to RDG’s finest theme bar, the ol’ Walkabout (or, to give it its full name, ‘Fuck It, Let’s Just Go To Walkabout’). Cheap, tatty, a bit rubbish. But open. The chain’s theme is ‘Australian’, which is less a creative decision and more a practical one, based on the demographic of the average bar staff interview candidate in the south east of England.

Location: It’s not moved, it’s still just off Friar Street, next to Yates’. What a pub crawl that is, eh? Walkabout, Yates’ and O’Neill’s…

Drink Selection: The booze choice has been expanded a bit since renovation, with three craft beer draughts squeezed in between your usual lagers and ciders. A slightly tweaked range of Aussie bottled beers is also available. The main change? There’s a cocktail menu now. But do you trust Walkabout with cocktails? Don’t be a drongo.

Grub: A couple of new additions to the menu do nothing to make it any more exciting. It’s passable matter to fill the void when drinking that won’t give you sickness and diarrhoea, but that’s about all we can really say for it. Ordering kangaroo is always a novelty, though. As is ordering koala and pretending to get indignant about it when they tell you they don’t serve it.

Dunnies: They’ve had a lick of paint but they’re still arctic tundras that you always leave surprised that your wee didn’t turn into icicles on exit.

Atmosphere: The new look is unlikely to have much of an impact over the general ambience of the place, although the slight hike in prices, additional seating and emphasis on more events seems designed to discourage Freelance Drinkers and Tilehurst Bogans. But Friday and Saturday nights will still be ‘challenging environments’, no doubt.

Beer Garden/Smoking Area: Two – the outside seating area and a roof terrace. No major changes from before, except for some more obvious branding and Aussie-themed spraypaint gubbins going on.

Price: £4ish a pint. Those iffy cocktails come in at £7+ a pop. Food is averagely priced too. Friday evenings (post-5pm) – all boozedrinks are two quid. Wahey.

Decor: They’ve actually done a pretty decent job. Alright, that Aborigine man on the wall down there isn’t massively convincing, but on the whole – it looks a damn sight better. And with so many other bars in town sprucing themselves up, they had little choice. It’s lighter in there now, fresher and not quite as grubby. Heh – ‘grub‘. Like what an aborigine would eat. Unless that’s racist, in which case – ignore that.

Sports? Too bloody right. Loads of screens, all the channels and a magnificent cinema screen upstairs for big events. You have to sit on amphitheatresque benched seating, but it’s something different, eh?

Pub Games: The pool’s gone from the looks of it. The fruit machines remain.

Seating: Obviously there are booths now. There had to be. Plus the usual range of slightly uncomfortable deliberately mismatched chairs and stools.

Events: Film nights, karaoke, some student thing, the Saturday night where a huge fight erupts on the dancefloor at Midnight and even a quiz night. Plus a dedicated cocktail evening and your £2 Fridays, where – unfortunately – they’re persisting with their dreadful live music that makes it impossible to be inside from 6pm. We’re not going to specifically shame the performer, but mate – give it a rest. STREWTH. 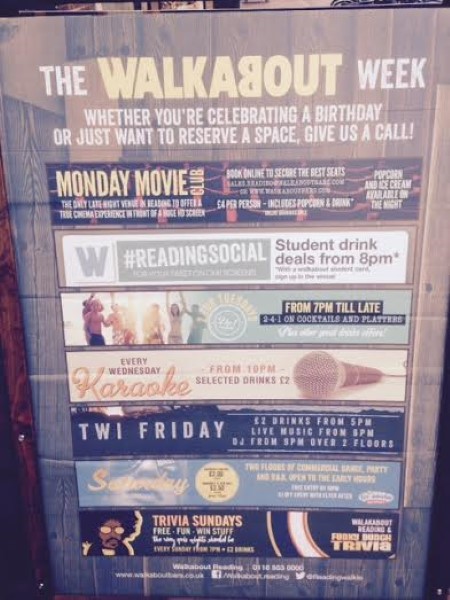 Any Other Comments: Nothing too interesting. The stage area now doubles as a food bit. And there’s now a second bar that will more than likely be unmanned 99% of the time. 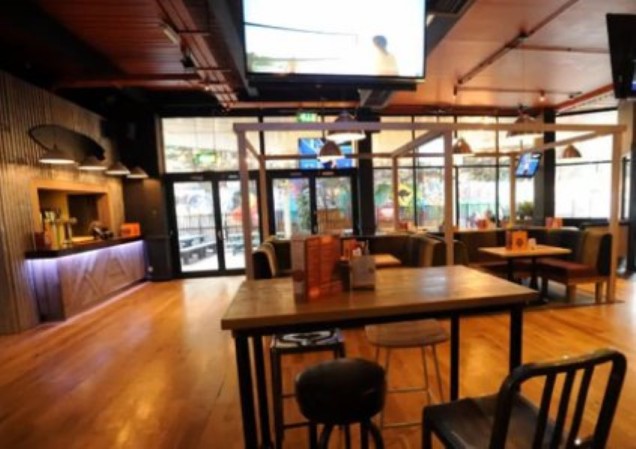 The All-New and Improved Walkabout isn’t all that new, but it is a bit improved. It’s better than it was, but, y’know, it’s still Walkabout.

Shit. We forgot to make a joke about Jenny Agutter wandering about in there naked. Bugger. Ah well, it’s too late now. Make your own up, mates.