All ‘information’ in this review is ‘accurate’ as of November 2018.

“One does not become enlightened by imagining figures of light, but by making the darkness conscious.”
― Carl Jung

The Honey Pot, The Sugar Lounge, Medusa Lodge (aka The Lodge/Diamonds and Pearls/X-posed @ The Arches/The Fanny Pit/Üranus). Reading is no stranger to strip clubs. Yet it was still something of a surprise to hear that the rather spacious 108 Friar Street – former home of the likes of Kinky Koala, The Treehouse, K3, etc. – was to reopen this year as an ‘adult entertainment venue’. Especially given its size and prominent spot on Reading’s second street (“Won’t somebody please think of the children!”). But here we are.

The idea of a new titty bar opening in town would have sent us a bit giddy a decade or so ago. But now, as old buggers, it doesn’t. Our idea of ‘adult entertainment’ is browsing the B&Q website for new kitchen taps while watching Countryfile. Still, we went on in anyway. For you. We didn’t want to go in there and look at a load of lovely big jugs all bouncing about the place, you understand.

Location: We’ve been over this already. Do pay attention, dear. It’s on Friar Street, a couple of doors down from The Hope Tap.

Drink Selection: Really rather ropey. There are no draughts, so casual drinkers have to pick from bottles of Budweiser, Corona or Peroni (£4.50-£4.80) or, if you’re a fuckwitted 23 year-old estate agent, you can order a mentally expensive bottle of wine or champagne.

Opening Times: The place is open Monday to Saturday, from 9pm until 3am. It’s shut on Sundays, presumably, out of respect to Our Lord Jesus Christ, the saviour and redeemer.

Please Note: Black Diamond is shut for five days of every month when it temporarily rebrands as ‘Blood Diamond’. You can get in if you ask nicely, but you really don’t want to. Our advice? Put a towel down first.

Decor: It’s called ‘Black’ Diamond for a reason. The place is seriously black. Black carpets, black walls, black ceilings, black furniture… And while there are some 500-odd ‘chandeliers’ in there, the 4,000 lightbulbs in them are all 5 Watt bulbs. So you can barely see the drink in your hand, let alone the dancer sat next you trying to coerce you into getting her a large glass of wine (which we didn’t buy – obviously) or the brief flash of nipple from the pole dance in the corner.

Basically, picture a mid-table Premier League footballer’s house, but imagine it’s 3am, there’s been a power cut and you’ve got cataracts. And your eyes shut.

Dress Code: ‘Our dress code here at Black Diamond is strictly smart casual. Smart jeans are acceptable. Tailored shorts (with smart shoes only), no hats, no sportswear, no sports trainers. We reserve the right to refuse admission at any time.’

They don’t enforce the dress code very strictly, though. We saw a women without a top or bra on in there!

Toilets: We’re not saying we saw anything when we were in there, so this is purely speculative, but it’s the sort of place where you wouldn’t be surprised to find three men in the cubicle together. And not in a sex way, either.

They have a toilet attendant in the gents. Which is fine/weird/funny/depressing, we’ll leave it up to you to decide.

Atmosphere: If you’ve never been to a ‘gentlemen’s club’ before, it’s easy to imagine them as sordid griefholes full of leering, handsy bastards and poor, exploited, trafficked-in strippers. The reality, though, is really rather different. Sure, there are always packs of braying pillocks only too pleased to be throwing money at designer vaginas, but if you’ve any sense of normality or decency, they’re actually pretty bloody intimidating. Especially if you’re not used to 6ft Russian women in revealing dresses pretending to find you sexually attractive for money.

What we’re saying is, it makes for an odd atmosphere. An odd, sexy, shameful, unsettling, slightly scary atmosphere.

Layout: Walk in, lobby. Left to the downstairs lounge bit. Bar on the right, seating on the left. Half a dozen booths for private dances at the back. Upstairs from the lobby, it’s left to some big ‘VIP’ areas, right to the bogs and the smoking bit.

Beer Garden/Smoking Area: There’s an uninspiring smoking terrace upstairs which provides a brief respite from the surprisingly exhausting business of all those polite conversations with beautiful 19 year-old women and awkward drinks refusals.

Punterwatch: We went in on Black Diamond’s very first ‘launch night’. To bag the free entry like the lousy cheap shits we are, we had to be in there by half ten. So there weren’t very many fellas in there at all. Of the dozen or so men in there, most were Eastern European and looked pretty at home in their environment.

In the future? Well, you have to imagine it’ll be full of the types of men that regularly go to strip clubs. Y’know. Wankers.

Joke Told to the Hostess on Being Questioned Why We Were Leaving After Only Half Hour That She Didn’t Get: “Sorry, I’m afraid I just came.”

The Rules: As with any good strip club or Shane Ritchie fan club, there must be rules. And here are Black Diamond’s:

– CUSTOMERS MUST REMAIN SEATED DURING ANY STAGE SHOW OR PERFORMANCE.

– ERECTIONS ARE NOT PERMITTED. SEMIS ARE ALLOWED BUT ONLY ON ADVANCED APPLICATION TO MANAGEMENT.

– STRICTLY NO MOBILE PHONES TO BE USED WHILST ON THE PREMISES. ALL PHONE CALLS AND TEXTS TO BE ATTENDED TO IN DESIGNATED AREAS. SNAKE 2 CAN BE PLAYED UNDER MANAGEMENT SUPERVISION.

– ANY UNACCEPTABLE BEHAVIOUR WILL RESULT IN EJECTION.

– ABSOLUTELY NO PHYSICAL CONTACT BETWEEN THE CUSTOMER AND THE DANCERS AT ANY TIME.

– NO BAD LANGUAGE OR SWEARING. ‘TITS’ MUST BE REFERRED TO AS ‘BOOBIES’ ONLY.

– AT NO TIME CAN A DANCER EXCHANGE PERSONAL DETAILS WITH A CUSTOMER OR BE PROPOSITIONED TO VERBALLY OR IN WRITING (ALL SEXUAL ADVANCES MUST BE MADE VIA MIME).

– ALL PRICES FOR PRIVATE DANCES MUST BE AGREED PRIOR TO THE PERFORMANCE
THE DANCER HAS THE RIGHT TO DECIDE WHO SHE WILL PERFORM FOR AND AT WHAT PRICE.

– DO NOT LOOK ANY OF THE DANCERS DIRECTLY IN THE EYE. LOOK AT THEIR BREASTS, BUTTOCKS OR VAGINAS ONLY.

– ALL DANCES ARE PAID PRIOR TO THE PERFORMANCE USING DIAMOND CHIPS WHICH CAN BE PURCHASED FROM THE RECEPTION OR WAITRESS USING CASH OR CREDIT/DEBIT CARD.

– DANCES CANNOT BE PAID FOR WITH ACTUAL CHIPS. AND ANYONE SEEN HANDLING A BATTERED SAUSAGE ON THE PREMISES WILL BE FORCIBLY REMOVED.

– MANAGEMENT RESERVE THE RIGHT TO REFUSE ENTRY AND OR SERVICE AT ANY TIME WITHOUT EXPLANATION.

– MANAGEMENT ALSO RESERVE THE RIGHT TO ALLOW SECURITY STAFF TO REPEATEDLY SLAM YOUR HEAD AGAINST THE WALL IF YOU BREAK ANY OF THESE RULES. OR ANY OF THE EXTRA RULES THAT ARE INTRODUCED BUT NOT EXPLAINED. OR IF THEY’RE JUST ANNOYED ABOUT SOMETHING. 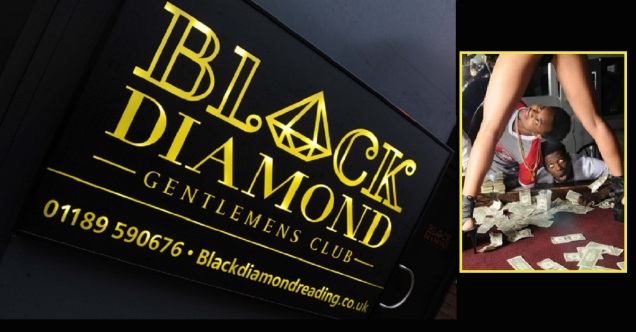 So there you are. In conclusion? TITS. But only seen with nightvision goggles.

(Oh, and sorry about that ‘Blood Diamond’ joke earlier. It made us wince and it was us that wrote it.)