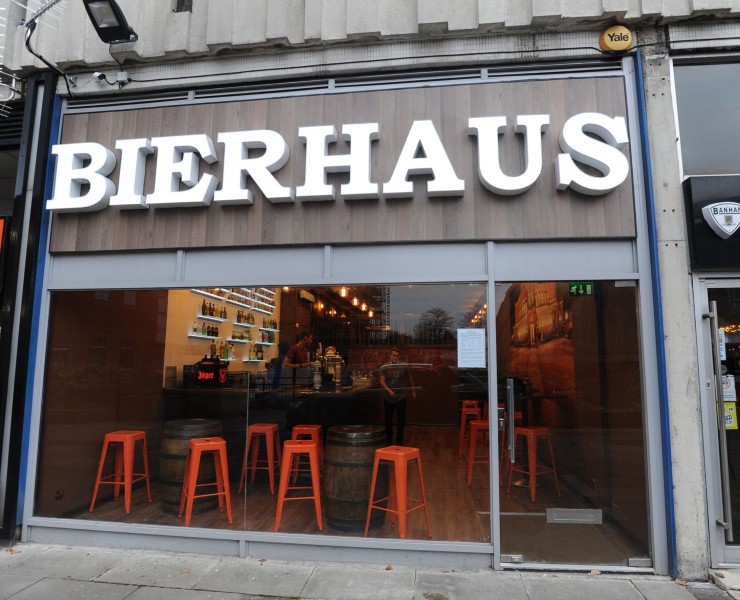 All ‘information’ in this review is ‘accurate’ as of December 2016.

We’re all in a big ol’ recession. Times are tough and people are angry. As rumbles of far-right sympathy echo throughout Europe, a new German bar and restaurant called ‘Bierhaus‘ has quietly opened in Reading town centre. It’s early days, but the word is that they expect to expand their operation quickly, hoping to taking over Piwinica Pub by Easter.

By this time next year, buoyed by their easy acquisition of Pwnica, they’ll have marched through L’Ortolan unopposed, forcing The Allied Arms to up their game for fear of losing trade and brick the windows of Bierhaus while they’re busy trying to take over Vodka Revolution.

Bierhaus will find allies in fellow Queens Walk firms Pepe Sale and Sushimania, but when The Allied Arms storm the driveway of L’Ortolan, Bierhaus will be forced to retreat. Soon, on the other side of town, TGI Friday will attack Sushimania, leaving the kitchen completely decimated.

Shortly afterwards, Bierhaus will shut down and go into administration and the owner will top himself in the basement. 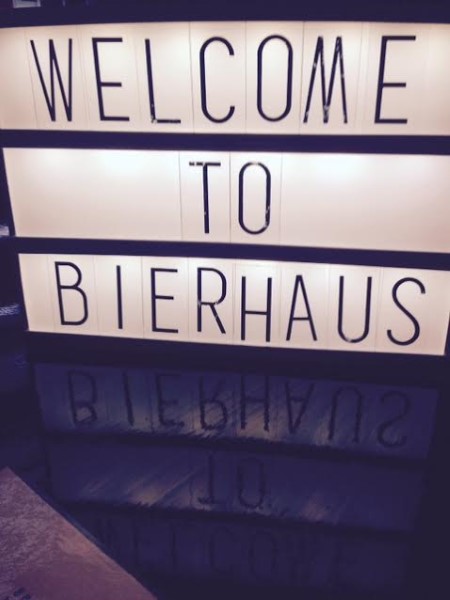 Location: Bierhaus (which is German for ‘beer house‘) is on Queens Walk, opposite The Hexagon and in between the newly-moved Bhoj curry house and the inexplicably popular sushi place mentioned above.

Drink Selection: Decent. Varied. There’s beers from across Europe and the world, many of which you won’t find in other boozeholes in Reading. The only down side is that – weirdly – there’s not really enough German beers. You’ve got Dortmunder and Veltins on draught and there are a few bottles like Erdinger and Fruh Kolsch, but that’s your lot. It’d probably benefit from going the whole hog, ditching the ciders and Stella and the like and going fully German.

You won’t find the Austrian ‘Santa Claus beer’ in too many places. Samichlaus is one of the rarest lagers in the world. And at 14%, it’s also the strongest. So, needless to say, it’s fucking HORRIBLE. It’s like someone made a custard out of Special Brew. Then spat in it. Still, worth trying.

Here’s a poorly-taken photograph of the booze menu:

Price: Pretty good. There are some cheapish bottles and everything’s priced about right. Sure, Hoegaarden and things are pricey, but they’re top end pints. That mental Austrian one’s £6.85 but, as we say, it’s rare. And you won’t exactly be having a session on ’em.

Food: Gut (that’s German for ‘good’, we’re not alluding to it giving us dodgy guts). Food from Central and Eastern Europe is pure stodge, you know that. So if you’re put off by that, don’t eat. But if you dig hearty beer-soaking-up grüben, then you’re in luck. The pretzels are top bar snacks and our personal favourite? The Kaesespaetzle (Bavarian cheese noodles)

It’s certainly not the wurst food you’ll ever eat. HA HA HA! A German person wouldn’t get that, of course. What with them having no sense of humour n’all. Not like us British folk. We’re proper funny, us. Robin’s Nest, Jim Davidson, Miranda Hart, that lanky TWAT off Pointless… We could go on.

Atmosphere: Hard to say, but we visited twice not long after opening and it was doing a decent trade. The mix of boozers and diners is a good one and it really does have the feeling of a proper European bar. It’s just a shame you can’t smoke and pick up a ridiculously beautiful but dead-eyed, coked-up prostitute in there while her pimp revs a Renault Twingo outside.

Beer Garden/Smoking Area: No smoking area out back or ‘owt, so you’ll have to make do with have a crafty snout out front. At night you can admire the lit-up Hexagon or the rubble where the Civic Centre used to be.

Toilets: They’re German. They’re efficient. So, of course theres a wall-mounted Dyson Airblade V hand dryer! Which is handy, because you kind of want to dry your hands and get out as soon as possible. There are two toilets, male and female. But UNISEX sinks. If you ask us, that’s one step away from hordes of writhing naked bodies copulating on the streets. Sodom and Gomorrah territory. It’s just not right.

Decor: When you first walk in, it’s great. Like we say, it reminds us of a real European bar. The kind you get on every street on the continent. Hole in the wall joints you can get a drink in at whatever hour. Granted, this place doesn’t open late, but you get the gist.

It’s very brown inside. With the odd gold and orange and definitely looks like the decor was a bloke’s idea. A huge poster of a golden Dresden theatre dominates the bar area and altogether – it looks good. Apart from these shitty signs on the wall. Awful awful things, there are…

Seating: Functional. The bar has pretty uncomfortable metal orange stools that look cool, but aren’t all that arse friendly. They’ve missed a trick in a way in the back area though, we think. Although no one really enjoys sitting at benches, that would lend itself more to that German-style beerhouse atmos.

Punterwatch: It’s not long been open, so it’s mostly inhabited by people checking the place out, but we reckon it could be a decent post-work drinks spot for town workers. The casual food set-up is handy for lanyard boozers that don’t want to skip dinner with their pilsner, but also don’t really want that whole formal and awkward sitting down for a meal with your boss/colleagues thing.

Any Other Comments: FYI – the place is open from 12pm to 12am every day, except Tuesdays when it’s, well, not open.

Sports? Probably not, though we didn’t ask. They were playing music TV on the two occasions we visited. Sky/BT Sports isn’t happening, but big terrestrial sports events might get whacked on should you ask nicely enough (bitte and danke).

Is there a nice cosy downstairs restaurant area that doubles as a function room that you can rent out? Ja!

Bierhaus gets zwei thumbs up from us. Interesting, different, independent… There are weird boozes, food you haven’t tried – it’s altogether a ‘wunderbar’. Ha ha ha!

Look at that. Intro aside, that’s nearly a thousand words with no mention of Nazis. Pretty bloody grown up of us, eh?