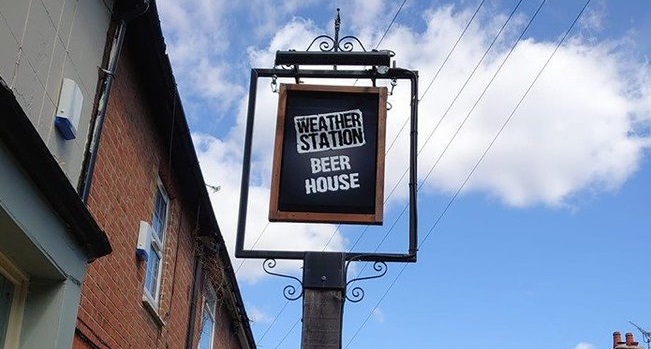 All ‘information’ in this review is ‘accurate’ as of September 2019.

What is a pub…? Webster’s Dictionary defines one as ‘an establishment where alcoholic beverages are sold and consumed.’ But what do we mean when we use the word, exactly?

That was – obviously – an extremely clever and impressively academic way to open a pub review, of course. But there’s also a bit of a point to it (sort of).

a) a warm, welcoming and cosy place to meet friends, eat peanuts and get pissed?

2) a bright orange box where you can sample 6.4% fennel and Frazzles-flavoured sour beer, look at lots of beards and listen to Death Grips album tracks until your eardrums bleed? 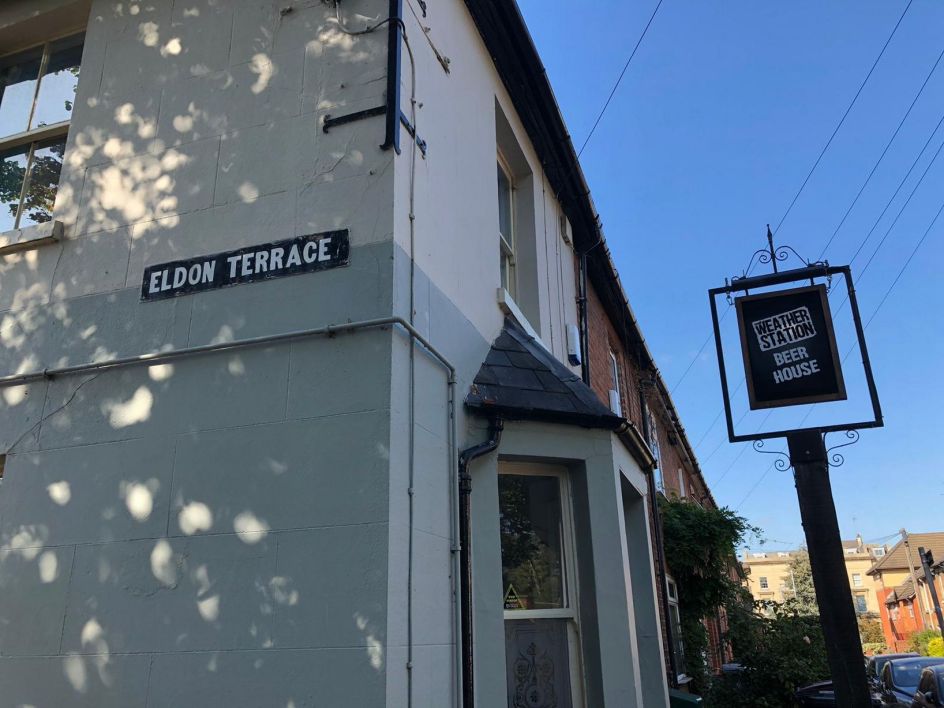 Location: The new ‘beer house’* from Silchester brewery Wild Weather Ales is where the old Eldon Arms used to be. So it’s Eldon Terrace, off Kings Road. It’s round the corner from The Retreat, in a residential area rather pompously known as ‘The Village’ to its poncier inhabitants.

*Yeah, the sign outside actually says ‘BEER HOUSE’. Which kind of ruins that whole ‘what is a pub?’ intro a bit, doesn’t it? Still, never mind. I’m not fucking writing a new one.

Drink Selection: The whole point of The Weather Station is beer. It’s technically a pub (or a ‘beer house’, whatever). But in reality it’s more of a tap room. WWA have their own actual tap room at their RG7 brewery, but this is a more visible and accessible place to show off their wide selection of beerboozes. Draught-wise, you can choose from over 20 different IPAs, sours, stouts and ales, most of which are from the Wild Weather stable. You can also select a can or bottle of beer from the fridge or pick from their extensive range of one cider.

At the time of writing (about a fortnight after opening), the spirit selection and wine is fairly limited, but then again perhaps it’s supposed to be. This place is all about the beers, after all. And Wild Weather are pretty bloody good at them.

Service: It was pretty busy in there when we visited, but bar staff were fully on top of things and there was no wait at any point. They were friendly enough too and – if you head in when it’s quieter – would no doubt happily talk shop with you if you’re one of those dreadful beer bores that likes to drone on and on about how malty and hoppy certain beers are, usually in front of me when I’m waiting to get fucking served. God, you people wind me up. Just order a bloody drink, it doesn’t matter which one. We all die in the end anyway.

Prices/payment: Drinks aren’t exactly cheap, but then you wouldn’t expect them to be. Watch out for beers priced at 2/3 of a pint, only if you order a pint, your wallet’s going to be a fair bit lighter. Only metaphorically, though. The Weather Station runs a cashless bar. As represented in the poster above by a big bull boxer with udders that’s knocking a farmer’s teeth out.

If anyone wants to pitch that to Blue Collar Street Food, I want 20% of all future takings, yeah? Don’t fuck me about and try to nick this idea, either. I’ve got a mate who works down the patent office, so I will find out.

Atmosphere: We were in on a Saturday night and it was decent. Lively, loud, real positive vibez, maaaaaan. Which may have something to do with all the 7.3% quince and Quorn pale ale everyone was on.

Beer Garden/Smoking Area: Nicotine can be enjoyed out the front, or in the little yard out back. When the food stall’s around, it takes up more than half of the area, so space can be at a bit of a premium.

Sports? It’s not that kind of pub, so there’s no Sky Sports or BT Sport. That said, there was at least one TV on the wall, so maybe terrestrial events can be shown. But, as so often is the case, I could well be talking shit here.

Look, if you care that much, just bloody ask them if they’re showing the Boat Race or whatever it is you want to watch. Jesus CHRIST. I can’t do everything for you, you know.

Music: It was bloody loud when we were in there. Constantly, from 6pm until 11pm. Look, I know I’m getting old, but it was genuinely quite off-putting. Especially if you’re sat under a couple of the speakers. In fact, it was so loud in there, I could barely hear myself think about how loud it was.

Seating: Here’s our biggest criticism… The arse accommodation. Music can be turned down and beards can be trimmed. But tiny metal little stools and barrels can’t be turned into a comfortable seating set-up.

We were lucky enough to bag a table on the left, but that was still wood on wood with buttock-numbing children’s seats. End up on the right hand side of the room, though and a ‘table’ of six will find the evening’s main entertainment to be an unending game of Try to Fit All of the Drinks on the Barrel, only occasionally interrupted by the odd spell of shooting pain caused by leaning your forearm on the metal rim of the barrel.

Decor: It’s orange. At least the middle part is, anyway. Flanking the bar, the pub’s still sporting the colour scheme of The Eldon, a kind of inoffensive blue and light grey affair. I’d say it’s a rather uneasy mix, but I’m not Laurence Llewelyn-Bowen, so I won’t.

Toilets: Clean, tidy, well stocked and given a lick of (orange) paint. The colour of the walls matched my first wee, but then it was my decision to order 4/5ths of a pint of Lucozade and chestnut Christmas stout.

The Weather Station ain’t a normal pub. So don’t expect it to be. It’s not a place to read the papers next to the fire on a Sunday afternoon while eating a pickled egg. It’s a craft beer pub for anyone who really likes IPA. And perforated eardrums.